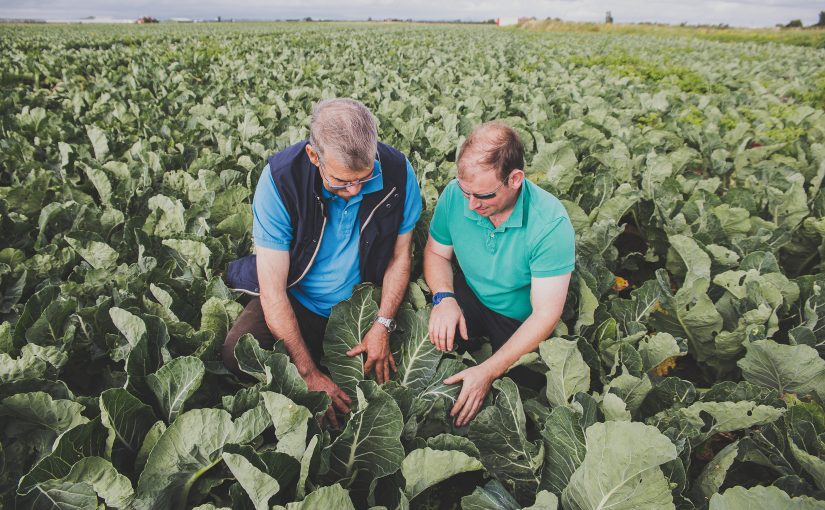 Cauliflowers are our main summer produce and they’re available seasonally between 1st of June and the 1st of December, weather permitting. The majority are grown on the silt soils of the Ribble estuary. Peter is recognised nationally as an authority on cauliflowers and the ones we grow here are famed for their white curds packed with flavour.

Romanesco are an exotic cauliflower variety with a unique green and spiky appearance. In season from July through to early December. This variety has a more pronounced nutty flavour than that of its traditional white counterpart.

A new addition to our range of produce, Cabbice is a refreshing and sweet-tasting cabbage. It has thick crunchy leaves that are ideal for shredding and eating raw in salads.

An excellent all round cabbage during the growing season. Whilst they’re tasty and fresh through the summer they also remain a great winter warmer.

Hardy winter cabbage with crisp and crunchy leaves. Heads are tightly packed with a sweet flavour.

A variety that stands out due to its taste and versatility. Our Wilja crop are grown in the silt of the river Ribble.

The variety of red that we grow works well with our traditional methods of crop rotation and is a stable part of our winter produce.

Originally grown for the restaurant trade in the North West, this variety has risen in popularity and spread to national whole sale markets and high end supermarkets in Lancashire.

It has a sweet and earthy taste. It also has practical benefits in cooking because unlike its red counterpart, its juices don’t stain or run into other elements of dishes. This is a vegetable that remains relatively new and interesting in the British food market.

A niche product with distinct and nuanced flavours, candy beet are highly sought after by those chefs or contentious cooks at home who wish to create dishes with a difference.

A specialist variety with a sweet, earthy taste. Like the golden and candy varieties, it won’t stain other ingredients when cooked together.

Some cereal crops are grown and harvested each year as part of a crop rotation cycle.